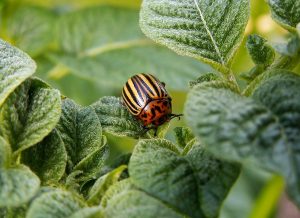 The following insects are common soil insects. When, due to a less vital soil and weak plant resistance, these fungi occur, one of the products bellow can be used. These products support the natural recovery ability and have a wholesome, nourishing and plant strengthening effect when the soil and the plants are influenced from the outside.

The vine weevil damages leaves of trees and plants. This is not severely harmful to the crop, although it does not look good. On the other hand, larvae of the vine weevil are much more harmful to trees, hedges and ornamental plants. The females lay about 500 eggs starting from May, which hatch in 8-20 days. These larvae feed on plant roots, after which they become beetles and the cycle repeats. The new larvae can inflict damage in spring again. As a result, plants may suffer damage twice a year. The larvae feed on small roots. As they grow they will feed on increasingly larger roots, tubers and even stripped bark. Sometimes it also happens that they damage the root collar, causing the plant to collapse. Tercol ensures a stronger resistance of roots against the larvae. The larvae are repelled by the smell and taste and no longer want to eat it.

White grubs are the larvae of Scarab Beetles . The beetles do not inflict major damage. However, the grubs are voracious larvae that eat roots of grass, some trees (mainly conifers and beech) and sometimes vegetables. This can cause major damage. Trees, grass mats as well as (ornamental) plants can die as a result of the voracity of the grub. Grass becomes detached from its roots and dries up, resulting in loose grass turfs. You will likely find a lot of larvae underneath these turfs. Secondary damage is caused by the animals that feed on grubs, such as crows, magpies, moles and hedgehogs. This is particularly troublesome for golf courses and sports fields.

Depending on the type of beetle, beetles appear from their pupal stage between April and June and start eating leaves. From early summer to mid-September they lay their eggs at 10-15 cm depth. These eggs hatch after 4-6 weeks, resulting in the voracious grubs. Some grubs retreat deep underground during winter. They come back to the plant roots to inflict major damage when the temperature rises again. Grubs do not retreat to deeper ground during mild winters. Some grubs continue eating the entire winter, for example the Welsh chafer, the rust-colored Scarab and the dung beetle. Depending on the species, larval stages take up between one and five years, after which the larva pupates into a beetle. After this the cycle repeats. Each type of beetle has its own life cycle. The grubs of the cockchafer are active from May to October. Grubs of the garden chafer are present only after mid-July, the larvae of the summer chafer appear from late July to just about end of September. Certain products ensure a better immune system and vitality of roots and the whole plant to fend of the larvae.

Leatherjackets are larvae of the Crane Fly. Depending on the species, this is normally a life cycle of one year. The adult female lays 450-1300 eggs which hatch after approximately ten to fourteen days. Grass can be significantly affected by the voracious larvae. Leatherjackets are tough, gritty and legless larvae. They are approximately 2 cm to 4 cm long. When the larva is startled, she pulls her head back but does not curl – unlike the cutworm. The larval stages occur from mid September to June of the following year. The larvae retreat in the soil during the winter and start eating again in spring. In June they pupate and after ten to fourteen days the crane fly emerges, completing the cycle. Leatherjackets can survive temperatures as low as -10 °C. Leatherjackets mostly live underground in burrows, but come out at night to feed. They eat plant material containing chlorophyll. Leatherjackets strip of parts of the plant and take them into their burrow. Older leatherjackets are recognizable by a grazed bare spot around this cave. They also feed on the underground green parts of the plant such as stem parts or the root collar. This severely weakens the plant, possibly causing it to collapse. Leatherjackets prefer a weakened grass turf, wet autumn and mild winter. They cause damage in many plant species, especially grassland (pastures , sports fields and public parks), but also to beet seedlings, winter wheat and other field vegetables. The damage may consist of yield reduction and deterioration of grass turf quality. Mice, shrews, moles and especially starlings and crows love these larvae. They cause additional damage when searching for the larvae. Certain products ensure that the larvae no longer like the taste of the treated plants

The wireworm is a larve of the click beetle. The click beetle lays its eggs between May and June mainly on grassland, (winter) grains and dense weeds. In July and August, the wireworm usually pupates at 10-25 cm depth in the soil, but they can also survive the winter at shallower depths under the vegetation. During spring they become active and they come up again. The larvae live in the ground for 3 to 4 years, after which they pupate into click beetles. The wireworm mainly lives in pastures, but is most harmful in arable and vegetable farming. Most wireworms are vegetarians, mostly nibbling on roots. The larvae of up to 2 cm length have three pairs of legs. They do not just feed on dead organic matter, but also on fleshy roots or just below the root collar. As a result, young lettuce, cabbage , chicory, sugar beet and corn plants will wither. Their traces also make products such as potatoes and carrots unmarketable.