Element of the month, iron I

The role of iron in plant growth

Plant nutrition is divided into two categories, the main elements and the trace elements. After discussing the various main elements, we now want to start on the series of trace elements that are important for plant growth. Of the 92 known natural elements, only 16, some speak of 17, are considered essential. The fact that more and more elements have been added to this list over the years already shows that what is not considered essential today can be essential tomorrow. In reality, therefore, there will be many more elements involved in plant growth, only we have not yet discovered them.

What is a trace element? 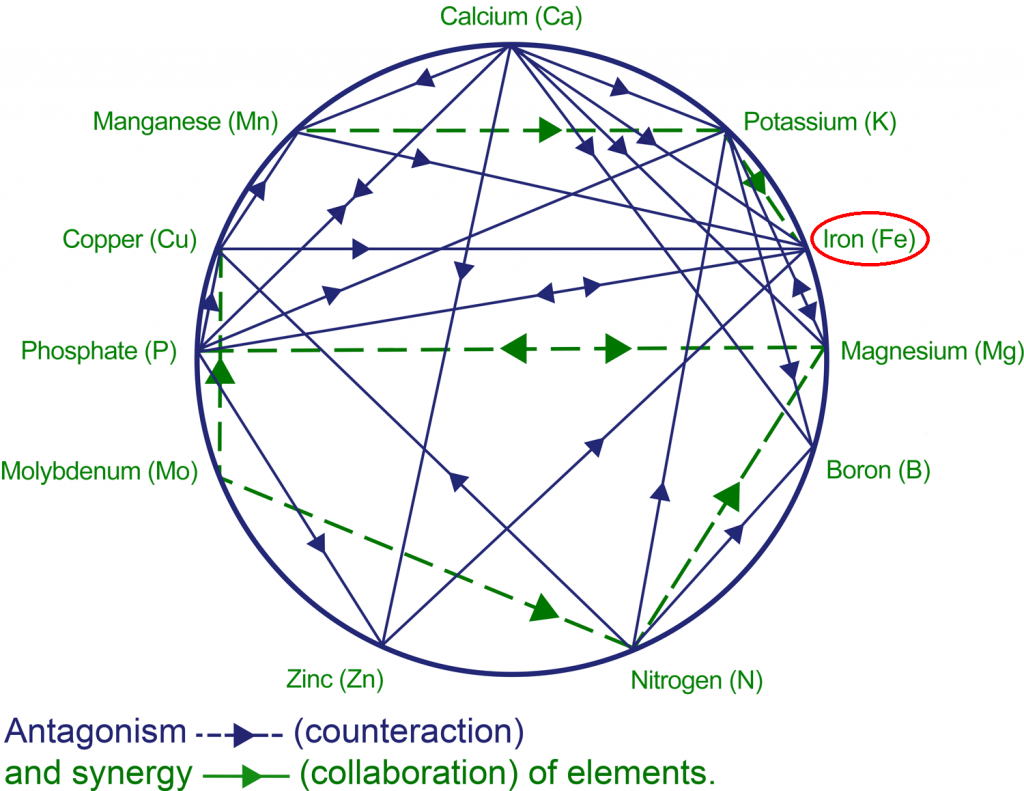 Without iron, a plant cannot produce chlorophyll and photosynthesis stagnates

That is quite a lot, especially when you consider that plants only need trace elements and therefore iron in ‘very small quantities’. But why is it that plants are so easily deficient in iron on some soils, and why is iron deficiency most common in greenhouse horticulture? What role does pH play in the absorption of iron? The fact that an element may be abundant does not mean that it is also available to the plant. Let’s therefore take a closer look at the role that iron plays for the plant.

The function of iron in the plant

A plant is an organism that, just like humans and animals, needs food in order to grow and survive. Iron is a small but important part of this. The role of iron in the plant is basically as functional as it can be: without iron a plant cannot produce chlorophyll and photosynthesis stagnates. As a result, it cannot get oxygen and will not be green. The function of iron can be compared to that of the human blood circulation. Iron helps to transport important elements through the ‘blood circulation’ of a plant. Below some functions in a row.

So just as iron in our blood helps to get the oxygen where it is needed, iron does a similar thing in the plant. Now it is nice to know what the function of an element is, but as a grower you are especially interested in how to get the element into the plant. So what is involved in the absorption of iron?

If a soil sample states that the iron supply in the soil is more than sufficient, this does not mean that the plant can absorb it. It is present but not biologically available. Why is that? Since the availability of an element, iron in this case, is the most important thing, we would like to consider this in more detail. We will have to discuss some chemical principles…

Availability of iron in the soil

It is true that minerals containing iron, manganese, or sulphur are particularly sensitive to so-called oxidation-reduction reactions, also known as redox reactions (help, here comes the chemistry; don’t worry we’ll keep it as simple as possible).

These are reactions that involve the transfer of electrons. Maybe we don’t always notice it, but life, our life and the life of every organism, including plants, is controlled by a little electrical current. What is that, electric current? Like water flowing through a pipe, an electric current is actually the same but not with water but with electrons flowing or moving. (You see, it is not that difficult).

Rusting is an example of such a reaction in which iron binds with oxygen and an electron is released (or to stay in the resemblance, an electron flows away). This kind of reaction just happens in nature, for example during the formation of the soil. Indeed, iron is usually fixed in main minerals in the bivalent form of Fe II, also called Fe2 + , or Fe(OH)2, all different names for actually the same thing.  When rocks containing such minerals are exposed to air or water during soil formation, the iron is easily oxidised (loses an electron, or rust) and the trivalent is called Fe III, also called Fe3+ , or Fe(OH)3.

We will continue on this in part 2.